In an effort to bring awareness to the disappearance of Lily Aramburo, our team got together yesterday to shoot a video for America’s Most Wanted “My Story”.

“AMW gets hundreds of letters each month from viewers who are seeking justice. Often, AMW is their last hope and the letter they send us might be the most important they have ever written. Like each writer, every My Story is different. Yet they all share a common bond — the search for justice.”justiceinmiami.org, America’s Most Wanted: My Story, Jul 2009 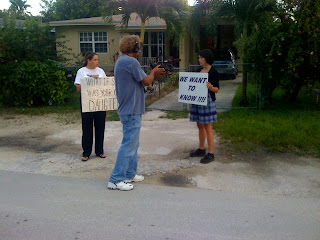 (Photo courtesy of Joe Carrillo) Here is Lilly’s mother, Lucely (left) and me (right) standing in front of the house where Lily was last seen in Coconut Grove, Florida.

Lucely asking the residents of Miami and Coconut Grove for their help. If you know anything at all about the disappearance of Lily Aramburo, please report your tip to law enforcement or place a call to Private Investigator Joe Carrillo at 305-926-3110. Next month, Lilly’s little boy turns two. This little boy is the spitting image of his mother. I wonder what it must be like for him, living without her.

Seems like just the other day, I got the phone call from David, his father, telling me Lilly was having the baby. I got ready as fast as I possibly could, jumped in my car and drove to from my apartment in Miami Beach to Hollywood to witness the baby’s birth.

So much has changed since then. That precious newborn is a toddler now, exploring the world around him. Without his mom. And without his dad. That’s “impermanence” for you.

And so it deeply saddens me to realize this child will grow up without both parents. But despite it all, he’s always happy, very bright and full of life. His grandmother has given so much love and attention.

Can you please help find his mom?

Help spread the news of this missing mother from Miami. There are many ways to help.

Email me, if you’re interested. Or leave a comment on the blog. And I’ll get right back to you.

Happy Birthday, sweet baby! May you always be joyous & happy and free from suffering!