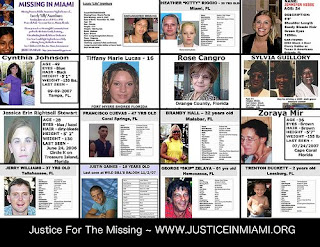 I’ve spent ridiculous amounts of time researching missing persons, especially in Florida. I’ve probably visited most police department websites in the state. I leave feeling terribly disappointed most of the time. It’s frustrating to visit a police website for info on their missing person cases only to realize they are nowhere to be found. In the digital age, there’s no excuse for police departments NOT to keep their current Amber Alerts, missing person cases and unsolved homicides posted on their websites. You would think something so important would not get overlooked! On that note, I’d like to share a few examples of what I consider good and bad.

If police departments want to close more cases they’re going to have to be more effective than the examples above.

Take a look at BSO’s site. Follow their lead. Get with times and learn to use social networking sites to communicate and engage! 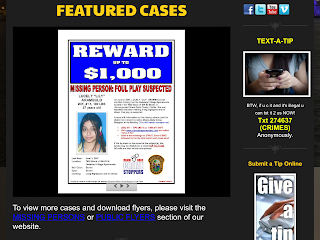 0
By yogini on March 25, 2009 in advocacy, crime, Diane Denish, law, law enforcement, Lost or Missing, missing adults, missing people, missing person, New Mexico, news, unidentified persons
I am very happy and proud that New Mexico’s Lt. Governor Diane Denish is taking a stand for missing persons and their families. Finally, a politician is doing something positive for the cause. A lot more need to follow her example. But she needs everyone’s support to make important changes happen. Watch the video and read all about it below.

Question: Do you think law enforcement should have a national protocol in handling missing person cases? Why or why not?

Web Producer: Bill Diven ALBUQUERQUE (KRQE) – The uncertainty linking dozens of missing women with remains unearthed from Albuquerque’s west mesa shows more needs to be done when someone disappears, Lt. Gov. Diane Denish said Tuesday.“Let’s be frank about this,” Denish told KRQE News 13. “This is mostly women who go missing and are not found, and that’s really what caught my attention.“I grieve along with all the other people in New Mexico not just for the families but for New Mexico. I think we can do better.”She’s called a meeting for Friday to bring law enforcement, the media and other organizations together to talk about solutions.Liz Pérez said she could’ve used more help when her daughter-in-law went missing. Nearly eight years ago Darlene Trujillo dropped her son off with Perez.She said she was going on a quick trip to Arizona, but she never returned.“(The police) said that they would file a missing persons report but that they couldn’t really do nothing on it because Darlene was over 18 years old,” Pérez said.Trujillo is not one of the four women who investigators have identified so far from the west mesa graves. Forensics experts have said the remains are those of Victoria Chavez, Cinnamon Elks, Julie Nieto and Michelle Valdez.All four young women disappeared in 2004, and all shared trouble in their lives involving drugs and prostitution. Eight sets of skeletal remains have yet to be identified, and investigators have yet to name any prime suspects in the case.Denish said she doesn’t want to hear about limitations adding that she thinks a lot more can and should be done to publicize missing persons cases quickly. 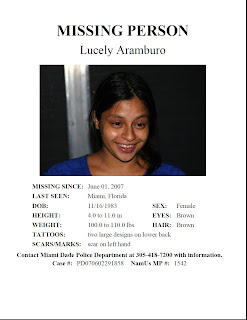 Is your missing loved one registered in the The NamUs Database?

The Justice Department has unveiled a computer database that will help families locate the bodies of lost loved ones. Families, law enforcement agencies, medical examiners and coroners, victim advocates, and the general public are encouraged to register their missing loved ones with The National Missing and Unidentified Persons System (NamUs), the first national repository for missing persons and unidentified decedent records. NamUs consists of two databases that anyone can search. The Justice Department hopes that law enforcement officials and the public will use the databases to share information to solve cases.Feb 2009
Let’s just hope law enforcement start to use it. Families deserve closure.